Latest figures reveal that PC sales are down whilst Google Chromebooks continue to fly off the shelves. So what do these trends mean for your business?

Researchers at Gartner expect 5.2 million Chromebooks to be shipped by the end of 2014 and predict this figure will triple by 2017. Meanwhile, IDC forecasts PC sales to fall by 3.7% this year as compared with 2013.

The rise of the thin-client 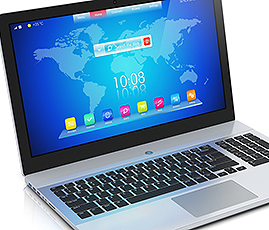 The growing popularity of the Google Chromebook has been driven chiefly by home users and the education sector although Gartner expects this to change, suggesting that thin-client laptop alternatives may start to feature more in the workplace as companies continue to embrace cloud computing.

The Google device runs Chrome OS in place of a windows operating system and is designed to be used primarily whilst connected to the internet, with apps and data residing in the cloud. Of course, that is great as long as you are operating in a fully hosted environment and you’re internet connection is 100% reliable.

The problem for businesses is that, for all of Microsoft’s efforts to move Office 365 and file storage into the cloud, most companies still need to load some software locally onto office machines, from payroll and accounts packages to CAD and CRM.

PC shipments in a ‘replacement market’

Rather than being attributable to increased competition from any other single alternative device, it seems the decline in PC sales is part of a more gradual trend. PC shipments appear to be descending towards a ‘replacement market’ with IDC forecasting that figures will drop steadily from 303.3m in 2014 to 291m by 2018, as businesses take longer to replace their computers.

But there may be some good news for manufacturers. Following the recent boost provided by the end of support for Windows XP, the PC market may soon be handed a further lifeline with the upcoming release of Windows 9.

Speaking of the release of Microsoft’s next operating system, which is expected in 2015, Loren Loverde, in charge of IDC’s worldwide PC tracking, was quoted as saying: “It will be hard to gauge the actual impact until the advantages [of Windows 9] to consumers and commercial users in functionality and integration with specific devices is more apparent.”

If you have any questions about your office hardware, please do not hesitate to contact us on the numbers above.